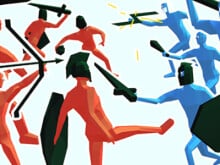 Funny Battle Simulator is a great simulator game where you will take control of your own army that will help you win against other players. Take your army to battle and command them so that each soldier knows his task. Take your soldiers and win every single battle that awaits you. Use your tactical skills by stationing your soldiers based on the weapons they are using. Show everyone that you’re the best general in the world!